I am delighted that at the Intergovernmental Platform on Biodiversity and Ecosystem Services IPBES 6th plenary in Medellin, Colombia, Ireland officially joined the Coalition of the Willing on Pollinators. This is an international coalition of governments who have the common objective to protect pollinators. It is implemented at country level, with policy and action for pollinator protection. 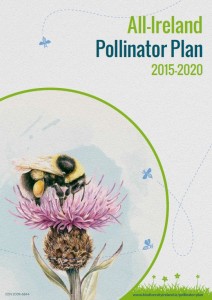 Ireland is one of the first 20 countries in the world to sign up to the coalition, and this represents a significant national and personal milestone. Getting pollinators up the political agenda in Ireland hasn’t been easy. When Una Fitzpatrick of the National Biodiversity Data Centre and I decided to start developing the All-Ireland Pollinator Plan (AIPP) almost 10 years ago, we did not imagine it would become so successful and influential. At the time, Ireland was suffering the fallout of the economic downfall, and conserving insects was far from most people’s priorities. However, by demonstrating the clear value of pollinators, working with partners from across a wide range of sectors, harnessing public concern for bee decline, lots of enthusiasm, fantastic leadership from Una, and a certain stubbornness, we launched the plan in September 2015.

The response has been overwhelming. More than 80 public and private organisations across the Republic of Ireland and Northern Ireland have agreed to help deliver these objectives so far. The Heritage Council and Bord Bia co-fund a Project Officer at the National Biodiversity Data Centre to help implement the Plan, and together with our partners, we have developed guidelines to provide tailored advice to different sectors – local communities, businesses, gardens, farmland and councils, as well as detailed “How-to” guides (which can all be downloaded for free from www.pollinators.ie). So far, 54% of the actions listed in the Plan have been completed and 37% are in train (see year 2 review). This is incredible in just 2 years, and demonstrates the power of commitment and collaboration, especially when financial resources are severely limited. The AIPP has achieved national and international recognition – it was hailed as an excellent example of how to engage people with environmental issues at the launch of the Irish National Biodiversity Action Plan in October 2017. The brilliant new infographic cartoon, brain-child of AIPP Project Officer Juanita Brown, has had >60,000 views from around the world already. And the Plan has been commended by various global organisations, with one of the leaders of the Dutch pollinator strategy (launched in January 2018) saying how much she loved the Irish plan at a European COST Action meeting yesterday! Officially joining the Coalition of the Willing is a significant advance in our work to conserve Ireland’s pollinators.

By signing up to the Coalition on 21 March 2018 (along with Bosnia and Herzegovina, Dominican Republic, Mexico and Colombia), Ireland joined the existing 15 partners (Austria, Belgium, Denmark, Ethiopia, Finland, France, Germany, Luxemburg, Peru, Slovenia, Slovakia, Spain, The Netherlands, United Kingdom, Uruguay) and has committed to:

Ireland already meets many of these commitments via the AIPP, which aims to:

But we need a concerted effort by all citizens, as well as public and private bodies, to make a real difference for pollinators. Raising awareness and signing up to the Coalition is only the first step. Making a difference in our policies and actions is required in order to conserve these and other important elements of our natural capital, which provide so much for our society and well-being.