There are >20,000 different species of bee worldwide. They are a diverse group, encompassing the tiny 2mm long Perdita minima and the massive 38mm long Megachile pluto. They all* have one thing in common: their larvae feed on pollen from flowers. The protein in the pollen is necessary for larval growth and development, and thus for producing healthy adult bees. When visiting flowers to collect pollen and nectar to fuel flight, adult bees transfer that pollen from flower to flower, thus making them brilliant pollinators.

And bees are ever-increasing in popularity across many sectors including conservation, gardening, fashion, marketing, and public/corporate strategies. Their popularity means that there has been an increase into bee research, and lots of excellent conservation strategies (including our own All-Ireland Pollinator Plan), but it also means there has been a lot of mis-use of bees in corporate and even well-meaning conservation strategies (see Charlotte de Keyzer’s excellent “bee-washing” website). And as their popularity spreads, so does the amount of incorrect information about them, which makes an Melittologist (someone who studies bees), buzz with frustration…

So here’s a blog I’ve been meaning to write for some time** – six statements about bees that are often used, but aren’t true…

1. One in three bites of food (or one third of food) depends on bee pollination: this one pops up on my twitter feed, in articles, talks, publications all the time…

The source of this “one in three” or “one third” quote is thought to be a 1976 Pollination Handbook, which says “it appears that perhaps one-third of our total diet is dependent, directly or indirectly, upon insect-pollinated plants.”

So the “one-third/one-in-three bites depending on bees” is wrong for several reasons:

i) it’s not just bees that pollinate food crops, and certainly not just honey bees – wild and unmanaged pollinators, including insects that aren’t bees, are important for crop production.

ii) these crops aren’t 100% dependent on animal pollination – the level of dependency varies among crop types and even varieties within crops and across with geographic context, and so the plants aren’t “dependent” on animal pollination, but benefit from it in terms of increased quantity and/or quality of yields

The other thing to remember is that bees and other flower-visiting animals are responsible for pollinating the vast majority of all flowering plant species on earth – they aren’t just important because they contribute to the human food system. They have many other values to us, and are an intrinsic part of functioning ecosystems.

2. Einstein quote: “If the bee disappeared off the face of the earth, man would only have four years left to live”. There is no evidence that Einstein ever said this – according to Quote investigator, he was linked with bees in the Canadian Bee Journal in 1941, and the 4-year deadline was attributed to him by a French publication ten years after this death. But there is no evidence Einstein ever calculated the fate of humanity in the absence of bees. Jeff Ollerton has a nice blog on this topic here and I don’t need to repeat.

3. The bee is in decline and needs our help: which bee are we talking about here? This is a massive over-generalisation of a group which comprises >20,000 different species worldwide (see excellent blog by Manu Saunders), and the point is that not all of them are in decline. In fact, some are doing very well, thank you very much, particularly the ones that can thrive in human-modified landscapes (whether urban or agricultural). One species that has been spreading its distribution westwards over the past two decades is Bombus hypnorum, the tree bumblebee (see pages 70-71 of Rasmont et al. 2015) – I first saw one individual of this species in southern England in 2000 (I wasn’t quick enough to catch it!), so it was first officially recorded in 2001, and spread rapidly northwards after that. In 2017, it turned up in Dublin.

On the other hand, there are some species that have rapidly declined: 30% of Irish species are threatened, and a whopping 77 species of bee face extinction across Europe, including 22 species that don’t occur anywhere else in the world. Some are threatened by climate change: for example, Bombus polaris, which is restricted to the mountains of Scandinavia and tundra of the Arctic, is likely to lose suitable habitat and to be extinct by 2050 (see pages 102-103 of Rasmont et al. 2015). But others are threatened by the familiar drivers of biodiversity decline: habitat loss, destruction, degradation and fragmentation, agrochemicals, parasites and diseases and other invasive species, and the combination of these stressors.

In fact, we don’t know nearly enough about most bee species to know whether they are in decline or not. Of the 1,942 species in Europe, more than half (1,101) were deemed “Data Deficient” during the Red-Listing process of 2015. That means that for more than half our bees, their extinction risk is officially unknown. However, studies from Europe and North America have shown declines in species richness and distributions of bees (Biesmeijer et al. 2006, Kosior et al. 2007), shifts in community compositions (Bommarco et al. 2011, Dupont et al. 2011), and declines in abundance (Cameron et al. 2011). A shocking report published recently (Zattara and Aizen 2019), using GBIF data, showed steep downward trends in bee species globally since 1990s.  The body of evidence thus suggests that bee decline is a widespread phenomenon in many species, even if we don’t yet have all the data.

4. Honey bees are most threatened and in need our help: Honey bees (and one species in particular, the “Western” or “European” honey bee, Apis mellifera) are managed by beekeepers worldwide, having been introduced by European colonists. And the number of beehives worldwide is not in decline, with numbers increasing steadily across the world, and in the EU (see graph below).

Honey bees are the most widely used managed bees for crop-pollination, despite not always being the best pollinators. With the increasingly popularity of bees as a flagship for conservation, and well-intentioned increases in urban beekeeping, numbers will probably continue to rise. 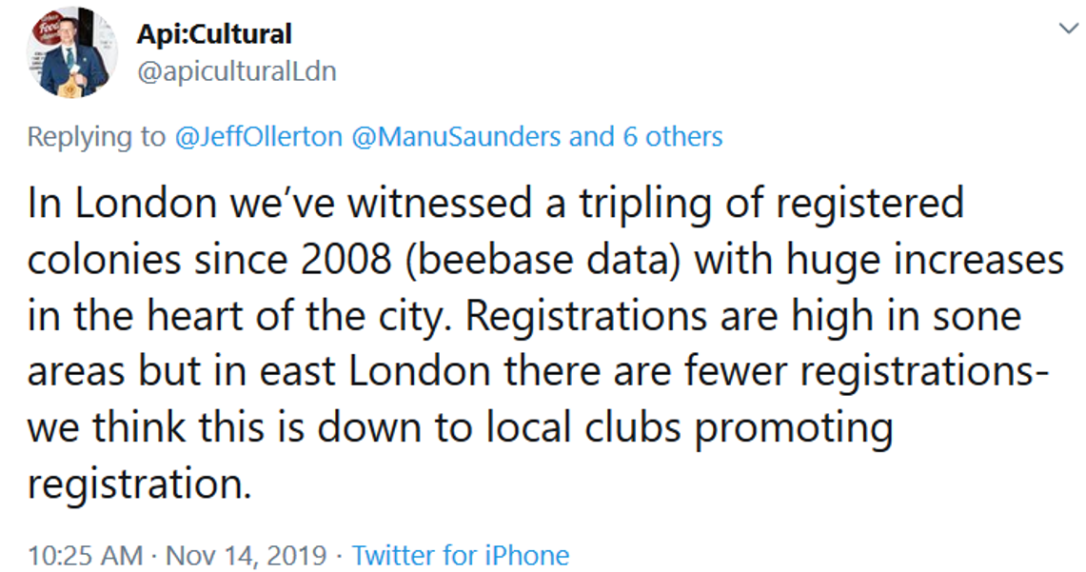 Beekeeping is of course not a solution to decline in wild bee species, and can sometimes actually exacerbate problems for wild bees (I’m not going to go into this now, but for example see Hannah Hamilton’s Irish Times article, and articles in Science and The Conversation).

Whether wild populations of Apis mellifera are in decline is less well known: Apis mellifera was deemed “Data Deficient” in the European Red List process (see Page 17 of the report), and wild, feral colonies, formed by bees escaping from managed colonies, are often not self-sustaining. Because Apis mellifera has been managed by beekeepers for hundreds of years, and selected for honey production and docility rather than resilience to environmental pressures, they may be less able to cope with environmental change (climate, parasites, disease etc.). And some authors are arguing that, in their native range, honey bees do need conserving (see Requier et al. 2019)

The bees’ stinger is actually more like a hollow needle, but attached to the sting is a venom sack – it is this venom that causes the reaction when it enters your body. The venom contains a cocktail of chemicals that cause pain, stop blood flow, histamines that give an allergic reaction and also pheromones, which stimulates a defence response to nestmates, who may also sting.

And why on earth have honey bees evolved to die when they sting you? Well, one reason is that there are no selection pressures to stop them from dying, as worker honey bees do not reproduce anyway – for more detail see here.

Did you know that it’s only female bees, ants and wasps that can sting? That’s because the sting has evolved from a modified ovipositor – the egg-lying tool of insects – and males don’t lay eggs.

6. Bees live in colonies in hives: Only approximately 10% of the world’s bee species are social and live in colonies. The vast majority of bee species are solitary, which means that a single female constructs her own nest, defends it from predators, lays eggs, and collects all the food for her offspring. Although many females can nest in aggregations, each has her own nest. These nests can be constructed in a wide variety of places, many of them in the ground, but others create or use cavities in wood, sandstone, snail shells or even within the nests of other social insects. The brood cells in these nests can be incredible feats of engineering, using mud, resin, leaves flower petals, plant fibers and even, in some urban environments, rubbish, like old plastic bags.

So, there you go, six things that have been bugging me and I felt the need to share! I am sure there are many others out there, so feel free to comment!

*Except Vulture bees, which are a small group of three closely related North American stingless bee species in the genus Trigona that feed on rotting meat. They substitute meat for pollen, but still make honey from nectar. This unusual behavior was only discovered in 1982, nearly two centuries after the bees were first classified.

**It took me so long to finish this, that Úna FitzPatrick, leader of the All-Ireland Pollinator Plan, beat me to it and published this excellent blog, with lots of myth busting and good advice about how to conserve bees.

About the author: Professor in Botany, Jane Stout leads the Plant-Animal Interactions research group at Trinity College Dublin and is co-founder of the All-Ireland Pollinator Plan.